← Taking A Sacred Pause Finding Refuge in Your Yoga Practice → 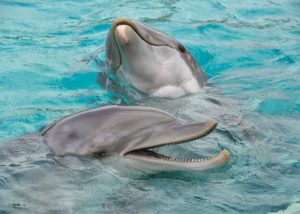 I love this phrase.  What does it mean to give yourself permission to play? And more importantly; why do we have to give ourselves permission?  Shouldn’t this just be a natural expression in our lives.

Many years ago I watched a documentary on dolphins.  Some amazing person figured out how to film dolphins in their natural habitat by creating a robot camera that was “hidden” in a fake dolphin.  It could swim with the dolphins and they did not seem to mind it being there.

What was great about this was that so many previously unknown dolphin behaviours were discovered.  One of them was that dolphins retain their sense of playfulness all their lives.

I remember one scene where the dolphins were “throwing” a piece of seaweed back and forth between themselves as if it were a ball.  And what struck the researchers so powerfully was that there was no reason for this behavior, it was just for fun.

I am a very disciplined person.  I do my practices on a regular basis. Oftentimes, getting stressed if I do not get the chance to do them because of life circumstances that arise.

What… who gets stressed if they do not meditate?

Let’s face it…no one should but I often do.  Not a trait that I am proud of.  Being focused and discipline is a good thing but staying soft and compassionate around that discipline is a better thing.

I have been asking myself lately…how can I give myself more permission to play.  And what about play is good for me?  Everything.

Play is defined as “an activity without purpose or aim”.  No goal in mind except for the sense of enjoyment.

Researchers have noticed that in animals this play behavior develops other fundamental skill sets that would normally not be developed.  For instance, connection to others in their group or a feeling arises that stimulates the body’s natural pleasure hormones.  Animals that play often develop new limits to their capacities that they normally would not have experienced.

Think about the times that you just let go in some activity often finding out that your capability was more than you previously experienced.

This was something I noticed when I was learning how to balance in an forearm stand  (aka…Pincha Mayurasana).  I had been diligently practicing at the wall for years with all the correct alignment and then one day I just went in the center of the room, let go of focusing so much on alignment and just played with kicking up.  Bingo….I balanced.  No effort just pure fun.  It was great.

Most of the researches agree….play is a necessary activity for us to feel relaxed, connected to others and happy.

Giving myself permission to play is my new mantra.

Maybe it can be yours.

← Taking A Sacred Pause Finding Refuge in Your Yoga Practice →